I’m in Cox’s Bazaar, Bangladesh today for a field visit UNICEF, visiting one of the largest refugee camps in the world…https://t.co/PFhJgXwSpmhttps://t.co/quZxXEcDX5#ChildrenUprooted #UNICEFFieldVisit @unicef @UNICEFBD pic.twitter.com/NSSY0aNPuN

But trolls being the self-critic, rather than appreciating Priyanka’s humanitarian act, started targeting her for lame reasons.

Here’s what the trolls said about Priyanka’s visit and why it is deplorable: 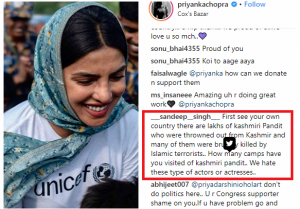 As a UNICEF brand ambassador, Priyanka’s itinerary is decided by UN programs, so if they would have asked her to visit Kashmiri Pandits, she would have visited them. She would have never said No to such a cause. And why everytime every celebrity is targeted for the situations they have had silenced for? Why do not people just appreciate the cause they are highlighting at that particular time? why do we have a mentality to question everything?

Trolling her and saying that India should be her priority is like showing your lame, sick thinking because if you have ever read or imparted with humanity, then you would know that the act of humanity knows no boundaries. And being a brand ambassador of UNICEF, she has to work across borders.

This visit should be aimed at helping refugees and not just a selfie stunt .

Priyanka Chopra is one of the powerful personalities in Hindi cinema. The actress has made her name in The West as well. She made her mark in Bollywood and outside on her own. She has a massive fan-following, so publicity stunt is not made for her.

It is the time that trolls get a life and try to appreciate people for their good deeds.

GUESS WHO: IS THIS RECENTLY MARRIED BOLLYWOOD ACTRESS PREGNANT?