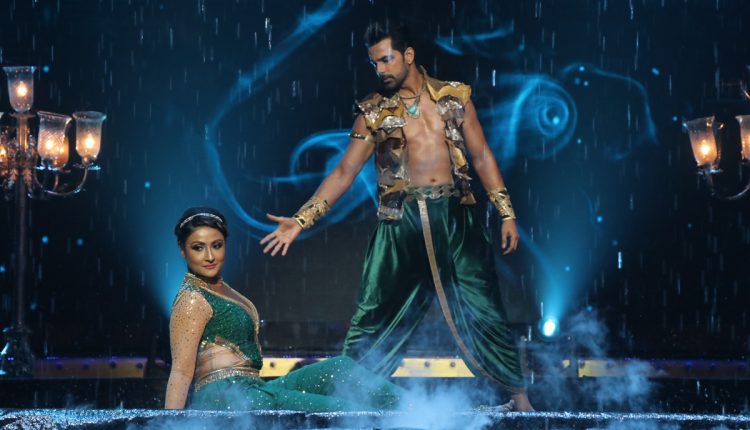 A lot has been happening on the sets of ‘Nach Baliye’ Season 9 and we’re very excited! In the upcoming episode, the oomph goes a notch up as the much talked about ex-couple Urvashi and Anuj display exquisite chemistry and choreography on the song sultry and romantic number, ‘Ek Dil Ek Jaan’. From the looks of it, the couple seemed totally immersed in dancing to the tune of the song and were totally in sync with each other- a flame to look out for, indeed!As per the video shared by the Star Plus team on their social media handle, the ex-couple are intricately dressed in the goldens and the greens and the overall atmosphere on the stage is lit up, both literally and figuratively. As beautiful as the chemistry in the beautifully choreographed piece looks, it matches the expectations of the audience and the fans of the couple. The piece ended with Anuj kissing Urvashi’s forehead while they both looked content and confident after completing their performance!

Furthermore, Urvashi, on being asked why has she always kept her relationship under public radar and been so private about Anuj and was it because of societal pressure, by judge Raveena Tandon, She very confidently answers, “No, it has never been about the societal pressure as I don’t care about people and what they say!” That’s an ironwoman we hear who is out to conquer it all. Nach Baliye has been in the news for the high glamour content and elaborate grandeur associated with the latest season. It’s also being hailed as the most exciting and intriguing dance reality show because of the twist that the concept has this time. According to the new track, Nach Baliye 9 will see five ex-couples and five current couples fighting it out to win the coveted trophy. The grand premiere of the dance extravaganze garnered all the eyeballs at the do where Salman Khan was present at the opening which raked up all the excitement amongst the audience. More so, with a start like that, fans are already rooting for their favourite jodis while also staying glued to catch what this unique concept with this season has to offer! The all-new season of Nach Baliye is being produced by Salman Khan and airs every Saturday and Sunday, 8 PM on Star Plus.

Mahie Gill Excited About Her Role In Posham Pa, A Psychological Thriller, Inspired From A True Story