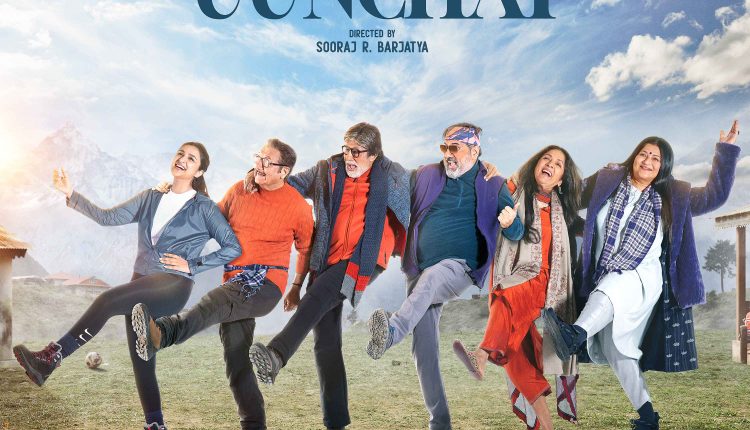 Uunchai’s ensemble comes together to invite all for their trailer release.

After back to back character posters that introduced Uunchai’s mega star cast to the world, today all the actors from the film’s ensemble have come together on a poster combined, for the very first time! Uunchai outed its first ensemble poster today with all its stars sharing the same space. Directed by Sooraj R. Barjatya, produced by his home production Rajshri Productions in association with Mahaveer Jain Films and Boundless Media, Uunchai will be in theatres on 11.11.22.

In the poster that came out today, Parineeti Chopra, Anupam Kher, Amitabh Bachchan, Boman Irani, Neena Gupta and Sarika (L to R) are seen doing a small dance step together, enjoying themselves in a playing field surrounded by mountains. All 6 seem to be having a gala time. The poster reads – Trailer Out Tomorrow and the image on the poster is a witness to the camaraderie and friendship that the cast shares on and off screen. Uunchai is touted to be the biggest ensemble film of the year. With 8 Indian Cinema’s heavyweights coming together to share the space on silver screen for the first time, Uunchai’s trailer release on 18th of October has the whole industry’s eyes set on it!

The backbone of Uunchai’s story is friendship and this reflected very strongly in the campaign that the film ran in the past week. The entire star cast had dedicated character posters and each was revealed on social media by the cast’s member best friend from real life. Dharmendra for Amitabh Bachchan started the trend, Anil Kapoor for Anupam Kher, Rajkumar Hirani for Boman Irani, Kirron Kher for Sarika, Gajraj Rao for Neena Gupta and Arjun Kapoor for Parineeti Chopra carried and completed the trend. The unique character posters have created a lot of curiosity and now the wait is for the trailer to know more about these characters. A film that promises to celebrate emotion, relationships and age, Uunchai is headlined by Amitabh Bachchan, Anupam Kher, Boman Irani, Sarika, Neena Gupta and Parineeti Chopra, with special performances by Danny Denzongpa and Nafisa Ali Sodhi. Uunchai is slated to be released on 11.11.22

I enjoy wearing those outfits which personally challenge me and my body , showcase my personality and show my audience who I am “says actress Jyoti Saxena