Virat Kohli and Anushka Sharma helped me when I was depressed, says K L Rahul

Virat and Anushka clearly defines the statement 'A friend in need is a friend indeed'!

KL Rahul also known as Lokesh Rahul  who plays as a right-handed batsman and occasional wicket-keeper. He plays for India internationally, Karnataka in domestic cricket and the Kings XI Punjab in the Indian Premier League. However, during his rough phase of time, Virat Kohli and Anushka Sharma helped him in distress by inviting him for a dinner date on New Year’s eve to cheer him up. 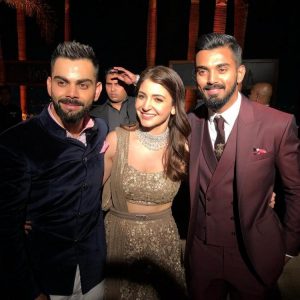 In a recent chat show titled Open House with Renil, Rahul revealed, ““There was one instance after a match at Melbourne where I had a terrible performance. I was miserable and depressed. Anushka, who noticed this, came up to my room and asked me to accompany her and Virat to their dinner date. The couple talked me through their similar experiences and that helped me understand how to manage these situations better.”

“They took immense care of me and ensured I was not alone. They even made sure I spent the new year night with them. They are an amazing couple and have really had a powerful influence on me,” he added.

Rahul appreciated Anushka’s kind efforts and said that they are still in touch and exchange a few messages in which Anushka mostly talk about his dog.

RANBIR KAPOOR: IF DEEPIKA PADUKONE IS A BIGGER STAR, SHE SHOULD GET THE BIGGER PIECE OF THE PIE