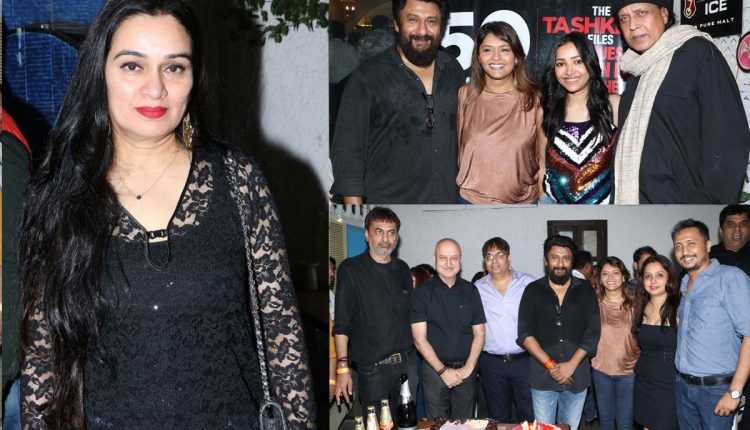 At a time when even Ajay Devgn does not celebrate his film De De Pyaar De touching the 100 cr league at the box office and most of the films do not remain in the theaters for more than a week, it is really creditable that The Tashkent Files has completed its 50 days run. Pranay Chokshi of SP Cine Corporation and Haresh Patel of AD Films along with Vivek Agnihotri and Pallavi Joshi celebrated the completion of 50 days of their film The Tashkent Files in Mumbai. The highlight of the evening were Mithun Chakraborty and Anupam Kher, besides Hrishita Bhatt, Durga Jasraj, Shweta Basu Prasad, Padmini Kolhapure, Anu Malik, Sonu Nigam, Madhur Bhandarkar, Abbas Mastan, Jayantilal Gada of Pen India Ltd and Ganesh Jain of Venus Records. Haresh Patel also celebrated his birthday with the cast and crew and friends. The party went on till wee hours. Mithun told me that though he is niot part of Zee’s DID this season, he is all set to act in two films this year, the details of which he would announce shortly. Mithun is excited that his son Namashi Chakraborty is making his debut with Bad Boy withproducer Sajid Qureshi’s daughter Amrin to be directed by Rajkumar Santoshi

Mika Singh Dons Two Hats For Mx Exclusive Dangerous, One Of Producer And The Other As…