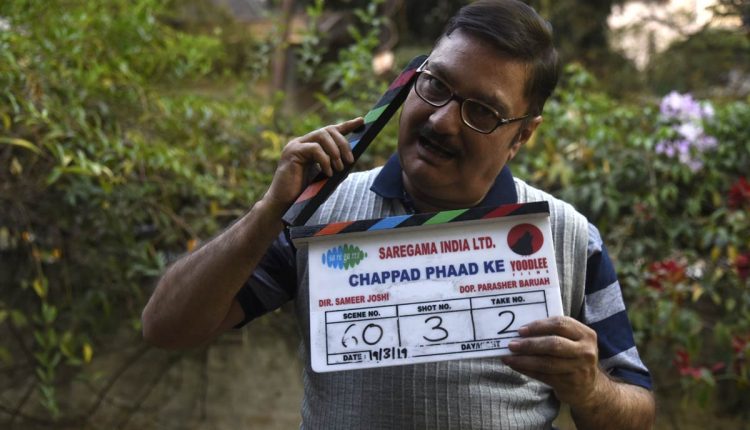 With a clear mandate to bring strong and interesting content to the table, Saregama India’s production house Yoodlee Films has rolled out their next film on floors – Chappad Phaad Ke. Starring Vinay Pathak and Ayesha Raza in lead roles, the film is a satirical comedy directed by Sameer Joshi that will have you in splits with its unique premise and storyline. After Kanpuriye (starring Aparshakti Khurana and Divyendu Sharma among others), Chappad Phaad Ke is the second venture that has gone on floors under the Yoodlee Films banner this year.

Chappad Phaad Ke is a satirical look at the consumerism and hypocrisy that engulfs us in our daily lives, set in the background of a typical middle class Maharashtrian family. The Gupchup family is headlined by the strict disciplinarian and morally upright Sharad Gupchup, along with his simple wife Vaishali and their two young children – Shubham and Ketaki. Burdened by the load of living up to the idealistic moral values Sharad so vehemently defends, the Gupchups lead a life of quiet desperation. But when the family chances upon a bag full of unclaimed cash, amounting to crores, their lives are plunged into an ethical crisis, on how their worldly desires and aspirations measure up what would be the right thing to do.

Celebrated actor Vinay Pathak, best known for his unique comic timing and sensitive portrayal of characters over the years in a plethora of films, will play the strict disciplinarian and patriarch Sharad Gupchup while noted film and theatre actor Ayesha Raza, who has displayed her acting mettle in recent films like Toilet: Ek Prem Katha, Happy Bhaag Jayegi, and Sonu Ke Titu Ki Sweety will be seen essaying the role of Vaishali Gupchup, his wife. The film also stars theatre and TV actors Siddharth Menon and Sheetal Thakur, who play the children of the Gupchups : Shubham and Ketaki respectively.

Actor Vinay Pathak commented, “The film spoke to me on the critical themes it addresses in today’s times : of finding your moral compass in a consumerist world. It’s a funny, sensitive and engaging story and I am really excited to be a part of this Yoodlee project.

Director Sameer Joshi added, “Chappad Phaad Ke has given me the chance to work with stellar actors like Vinay and Ayesha, and a young talented cast of Siddharth and Sheetal. This is a modern day story – a story that is at once both relevant and engaging . I am really happy that Yoodlee Films is backing this project and enabling me to put this human drama on screen.

Siddharth Kumar, Producer Yoodlee Films and VP TV and Film, Saregama India said, “At Yoodlee, our aim is to create relevant content that audiences find engaging and can initiate conversation, while keeping the entertainment value intact. Chappad Phaad Ke is our second film that’s gone on floor in 2019 and it’s a satirical comedy that touches relevant chords in our lives. With such a talented ensemble cast, we at Yoodlee are really looking forward to presenting this film to the world.”

Chappad Phaad Ke is being currently being shot in Pune and will be releasing in the latter half of the year.

Thank You, Sanjay For Taking Up What I Now Think Is Your Biggest Challenge