Imagine Ek Tha Tiger with Shah Rukh Khan in the lead. Now imagine Chak De India with Salman Khan. Can’t imagine? Even we can’t! Thank the almighty that these superstars nodded their heads at the right time else our favourite films could’ve been entirely different!

We’re sure that you’ll be shocked to know but a huge number of blockbusters, which had turned out to be massive successes for the lead actors, were turned down by other Bollywood A-listers! Here’s a small list of stars and the movies they chose not to associate themselves with:

Though he has been honoured as Dr. Shah Rukh Khan in real life but we can’t imagine him as Dr. Murli Prasad Sharma! Though SRK can do justice to pretty much any kind of a role but the Munna Bhai series was a series to remember for life and Sanjay Dutt along with the other cast had aced their parts and that is why it’s impossible to even imagine the film with a different cast!

Hrithik Roshan refused the role of Mohan Bhargav in Swades

It was lauded by the critics and the audiences and it also went down the Oscars road. Swades was a film that you’d want to keep in your collection. Shah Rukh Khan delivered one of the best performances of his career but did you know that the film was first offered to Hrithik Roshan who said no after reading the script. Well, maybe he had some superhero dreams and didn’t want to play a common man!

This is what he was seen doing post the release of Swades. Poor guy!

Goliyon Ki Rasleela: Ram-Leela laid the foundation for the ultra successful collaboration between Sanjay Leela Bhansali, Ranveer Singh and Deepika Padukone. The trio went on to deliver another blockbuster in Bajirao Mastani and are all set to reunite for Padmavati. But all of this might not have happened at all! Did you know that Goliyon Ki Rasleela: Ram-Leela landed in Deepika’s lap only after Kareena Kapoor Khan and Katrina Kaif rejected the film. Deepika is one lucky girl!

‘Ooh La La’ became the song of the year. Vidya Balan took home the National Award. All in all, it was a win-win situation for Team Dirty Picture. But amidst all this, we’re sure Kangana must’ve been shedding a tear or two at least. Yes, the Milan Luthria film was earlier offered to Kangana who chose Tanu Weds Manu over the successful biopic. “I chose Tanu Weds Manu over The Dirty Picture. And till date, people call me stupid for losing out on The Dirty Picture,” Kangana said in an interview.

He might be a perfectionist, but way back in the 90s, all the biggest stars wanted to be the hero and nobody was willing to take up an anti-hero character, including Aamir. Eventually, Darr turned out to be SRK’s big break and put him in the big league. We’re sure Aamir must’ve been thinking how K-K-K-Krazzzyyy he was to turn this one down!

Was this Vivek’s worst choice ever? Oh no! How can we forget the fight with Salman. Oops! 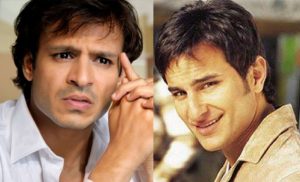 As if his long list of personal mistakes were not enough, Salman Khan made a major professional blunder by turning down the blockbuster Baazigar.

“I had refused Baazigar. When Abbas-Mustan came to me with the script, I asked my dad for his inputs. He felt that since it’s a story of a negative character they should add an angle of the mother in it. They didn’t agree. When I turned down the film, they went to Shah Rukh and then they added the mother angle! But I don’t regret it at all.” said Salman.

Maybe his driver rejected the role, not him!

Khilaadi Kumar is the first name that comes to mind when one thinks of fitness. The same happened to Rakeysh Omprakash Mehra who had offered his mega project Bhaag Milkha Bhaag to the superstar. However, to everyone’s surprise, including Milkha Singh, Akki turned down the film and the rest as we know is history. “For the longest time, I felt that Akshay was correct for my role. But during my initial interaction with Farhan, I realised that he was the best man. I discovered that he has the same determination and grit as me. Now, I can confidently say Farhan is the best choice,” said sprinter and athlete Milkha Singh in an interview.

In the third season of Koffee With Karan, SRK admitted in his trademark witty style, that he is the “4th idiot” for not doing 3 Idiots. 3 Idiots went on to become one of the biggest blockbusters of Hindi cinema and has achieved cult status over the years.

We can feel you, Shah!

This list would have been incomplete without this faux pas! Bollywood’s Nawab Khan had actually turned down Dilwale Dulhania Le Jayenge, the film which went on to become the longest running film in India! The film made SRK what he is today and as for Saif, sorry buddy, even though we love you—Raj for us is SRK. End of story.

Can you imagine what these films would’ve been like had the first choices not refused to be a part of them? Share your views in the comments section below!