“As a filmmaker, you can no longer take your audience for a ride anymore” – Ramesh Sippy

Ramesh Sippy was born on January 23, 1947, and is today celebrating his 74th birthday. Thanks to his Sholay, Ramesh Sippy is by now a household name. Though the debacle of his Shaan had put him temporarily out of circulation the man girded his loins and made his next film, this time for an outside producer-duo. He has also had the distinction of having made the star-studded extravaganza Shakti starring Dilip Kumar and Amitabh Bachchan, for the first time in their careers. RAMESH SIPPY is being pencilled in by Jyothi Venkatakesh on the occasion of his 74th birthday today for the readers of bollyy.com and Mayapuri 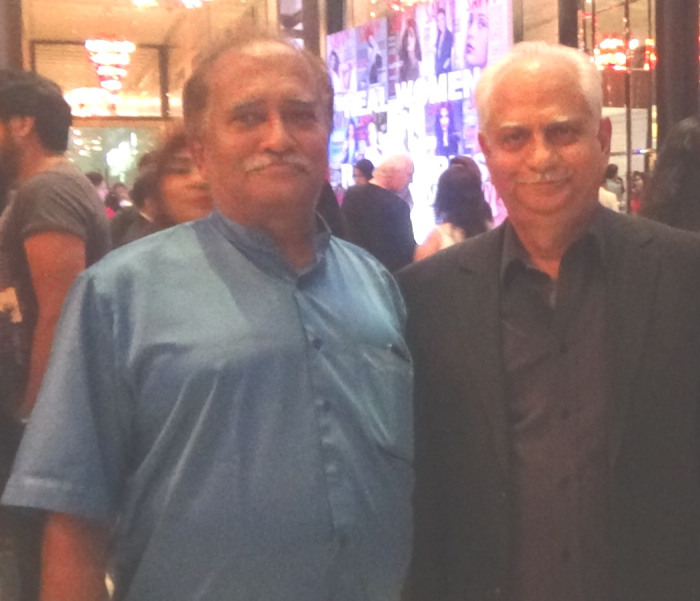 If Shaan and Shimla Mirch at the fag end of his career proved to be the only flops in his otherwise illustrious career as a filmmaker, Ramesh has hits like Andaz ( his very first film as a director), Seeta Aur Geeta ( on the sets of which the romance of Sanjeev Kumar and Hema Malini blossomed) and Sholay, which provided to the film industry an actor called Amjad Khan). He was confident that Shakti will turn out to be an even bigger hit because he had woven emotion with action, a rare combination in Hindi films, which abound either with gory action or melodrama. 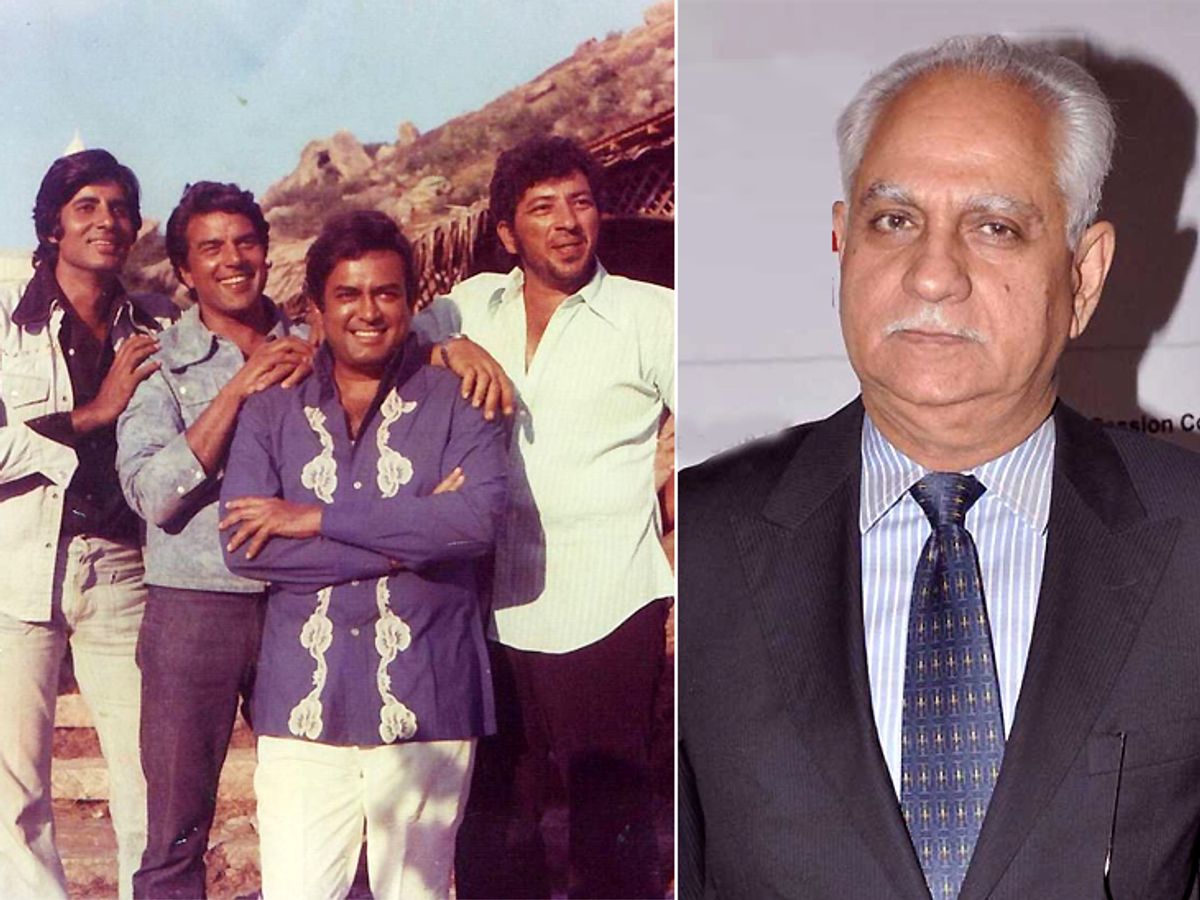 Before launching himself as a full-fledged director, Ramesh was working as an assistant for directors like Bhappi Soni, H.S. Rawail and Narendra Bedi in films like Brahmachari, Mere Sanam and Bandhan. He had assisted H .S. Rawail only on two sets when he was making Mere Mehboob with Rajendra Kumar and again when he was assisting Narendra Bedi (when he was making Bandhan for his father G.P. Sippy). Ramesh launched his first film as a director- Andaz and ever since then he has not looked back. Ramesh Sippy had launched Shakti five years even before his Shaan was launched. Over the last several years, we talked about himself, his career and about the various aspects of the film industry today and his opinion on this and that.

Shakti was the first film that you have directed for an outside producer. Are you ready to take up directorial assignments from outsiders? What made you take up Mushir and Riaz’s offer to direct Shakti?

Once I take up an outside assignment to direct, I should be able to do full justice to it as if it is my own film. The reason I took up Shakti was that Mushir and Riaz were and are reputed producers, who could deliver the goods on time, with the resources at their command. I should also confess that the temptation to do a film in which Dilip Kumar and Amitabh Bachchan will be working together for the first time was also there. It was a slightly different subject different from the kind of films that I normally am associated with as a filmmaker.

Why was Shakti delayed while Shaan, launched after Shakti, was released later? 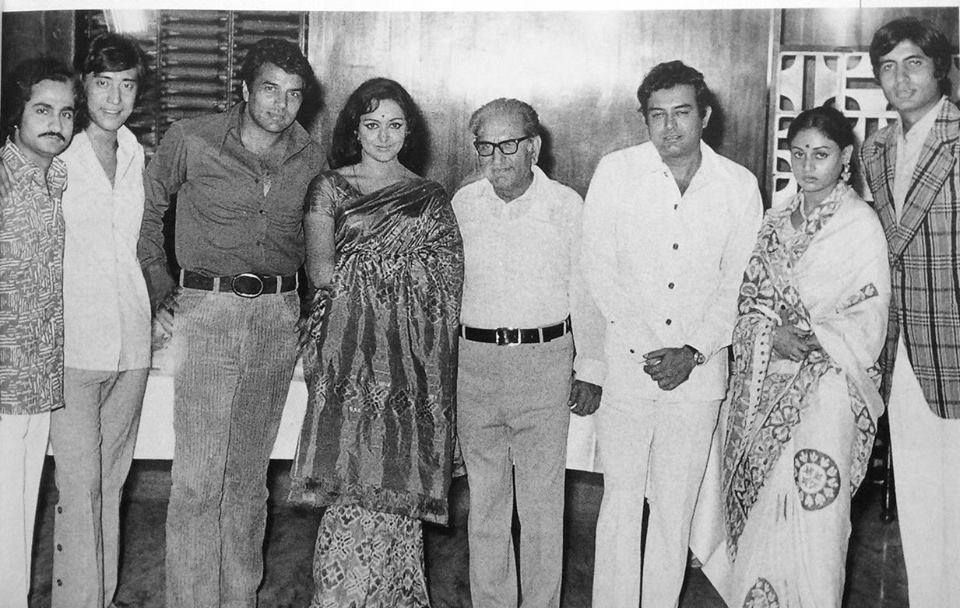 Though we had launched Shakti as far back as 1977, the actual filming started only in 1978. And unfortunately for us, soon after the first schedule, Amitabh had his first round of jaundice which put him out of work for a while. Then there came a stage when I found that Shaan was almost complete and it was difficult to concentrate on two different films at the same time. I realized if I too were to work like any other director in the rat race, work would automatically suffer. I preferred to complete Shaan and then concentrate on Shakti wholly. In fact, even before Shakti was launched, I had made it clear to the producers that I was intending to launch Shaan and I would give top priority to my own film. Amit was again not well and again we lost his dates. When he resumed, he had to complete a couple of other films, which were pending because of his earlier bouts of illness. In fact, I wanted to add one more song in Shakti but since Amit met with this accident on the sets of Coolie at Bangalore, I gave up the idea and we decided to release the film without adding that song. Luckily for the producers, Amit had already dubbed for the entire film.

As a director, do you advocate compromising with the box office in order to sell a film? 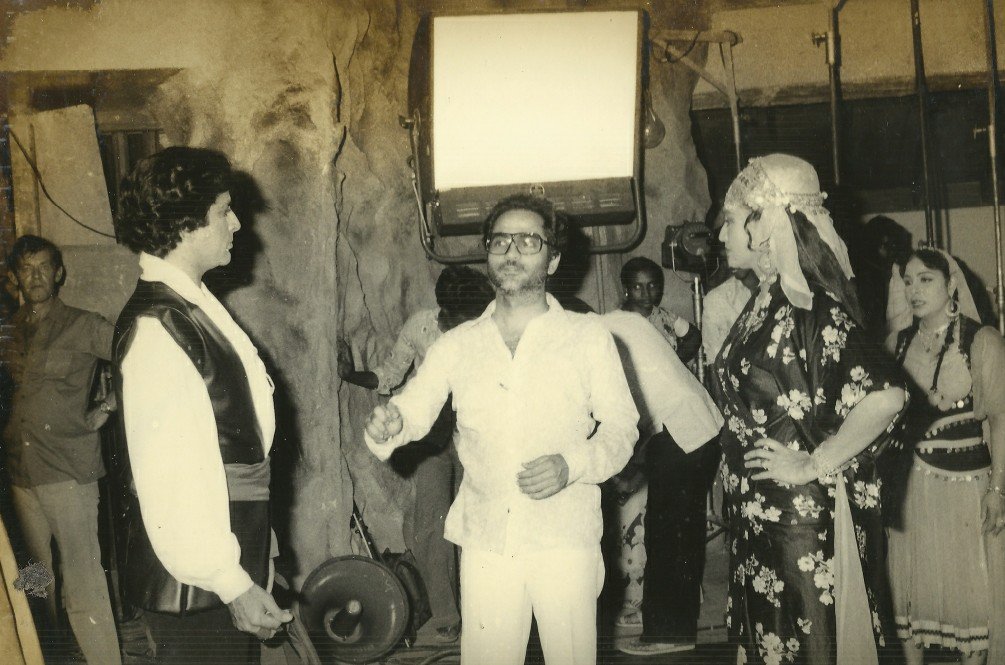 I have to think in terms of a project when somebody signs me to do a film with stars like Dilip Kumar and Amitabh Bachchan. I may not make compromises for masala as much as the others of my ilk make, but I do try to make my films palatable to a very large audience as much as possible. It is important for me that a film of mine succeeds at the box office but it is also equally important that the audience should say that it is a good film. If I churn out a successful film, the business-minded industry will appreciate it and distributors will flock to you but if your film flops but you have put in your best efforts, the audience would say that you have done your job well. You see the audience can no longer be taken for granted. They have become more aware of how films ought to be made. As a filmmaker, you can no longer take your audience for a ride.

Are you in favour of giving breaks to new faces in every film of yours, like you discovered Amjad Khan in Sholay? 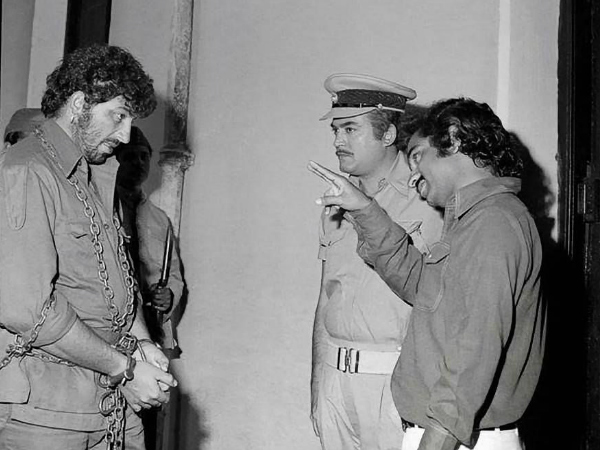 If I can take at least one or two new faces in every film of mine, it is better. The making of a film, according to me, will not give you the satisfaction as a maker, if you cannot cast an artiste of your choice whether he is a star or a new face, who you feel will deliver the goods.

How do you go about with the casting of the actors in your film? 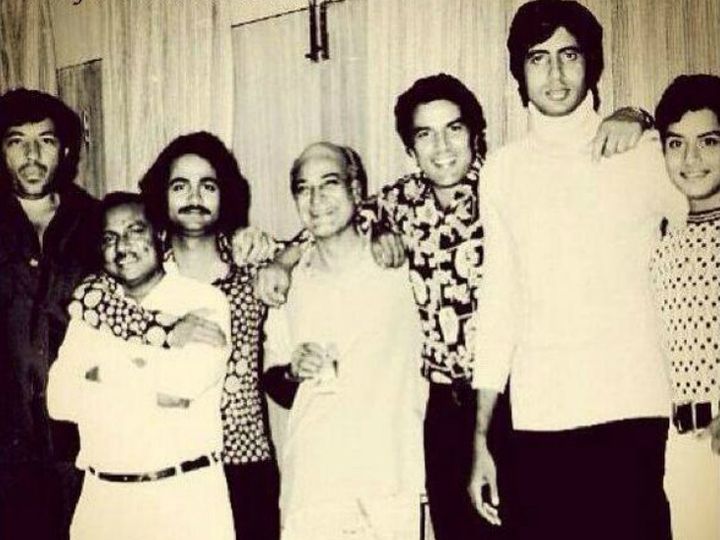 A lot of Amitabh Bachchan’s films have cast him in a slot keeping in mind his popular image which sells today. The tendency among most of the filmmakers today is to take an actor’s personality and build up his role keeping in mind his image. Though it certainly works, I for one would like to differ. To suit a certain role, you can pick a new face or a known star depending on what you need and sit back and hope for the best. In my case, in one film (Sholay) one (Amjad Khan) worked but in another (Shaan) it did not work (Kulbushan Kharbanda). You have got to keep on taking your chances if you want to be different from the others of your ilk.

What is filmmaking today in your opinion? 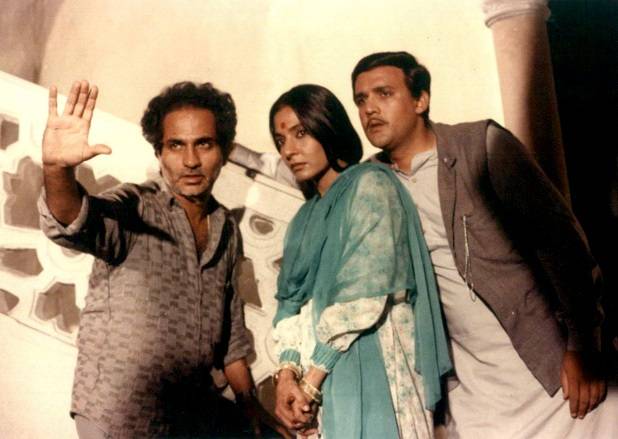 There is no clearly defined law or principle for filmmaking today. There is no formula either. If the subject is very good and the film is well made, a film will run anyway, whether there is a star cast or no. At the same time, the value of a fine actor is also indispensable. There are subjects for which it will be better to take on new faces, like Ek Duuje Ke Liye. While Dilip Kumar’s Kranti and several Amitabh starrers have worked well at the box office, some big-budget multi starrers failed to deliver the goods, including my own Shaan. Stars by themselves do not guarantee success for a film but they contribute to the making of a good film.

Are you aware of the fact that a South Indian producer had already made a rehash of your Shakti and released it with Jeetendra as the hero called Farz Aur Kanoon? 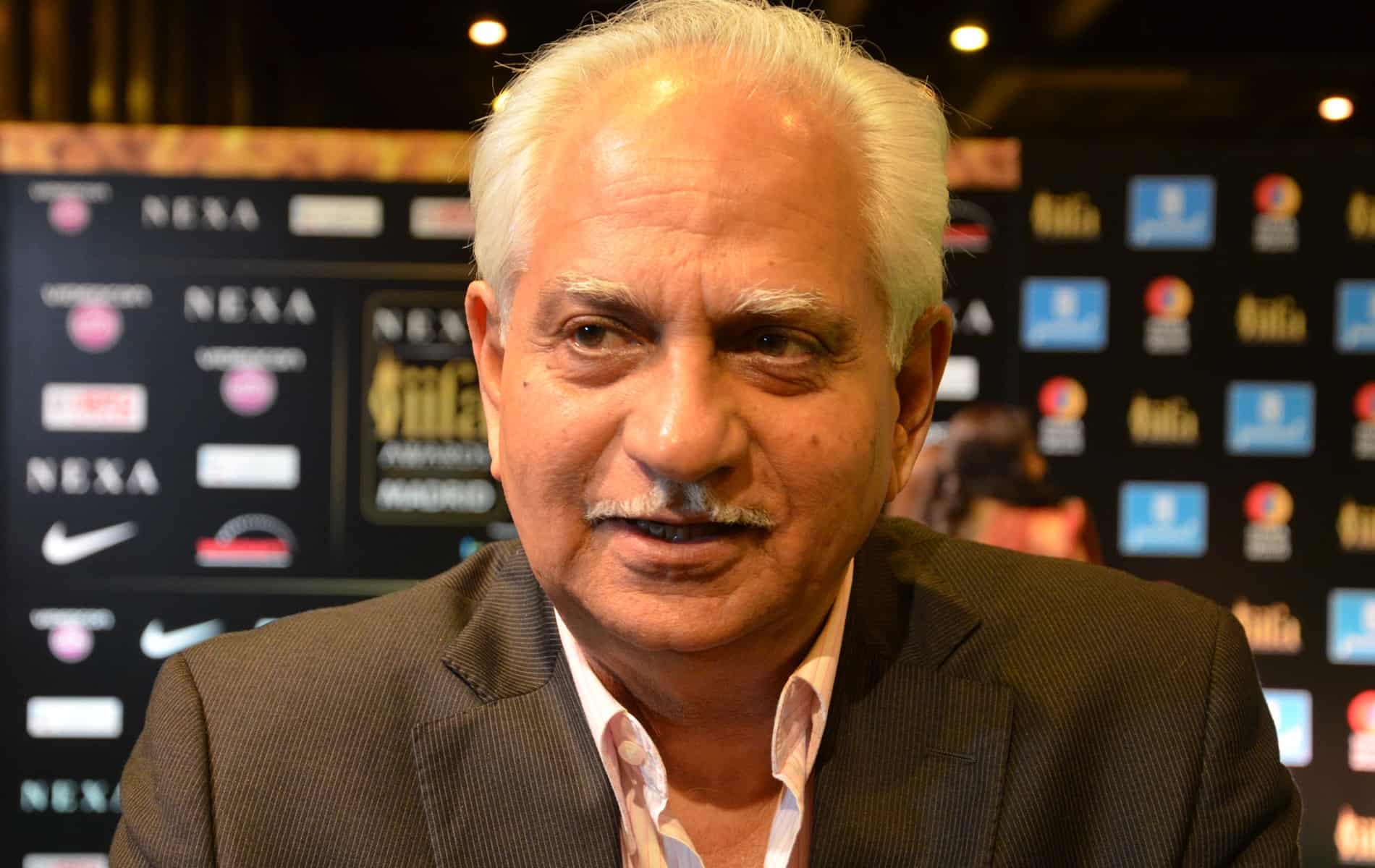 There was very little of the Tamil original Thangapadakkam in Shakti. Even the scenes had been totally changed. I believe the makers of Farz Aur Kanoon adhered to the Telugu original. In any case, it couldn’t affect Shakti because in India so many films are being made with similar subjects. However, it does leave a bad taste in your mouth when a colleague stoops to the level of imitating your product in an unethical fashion. I just make a film and hope for the best.

Sunny Leone to do a cameo in ALTBalaji’s Helllo Jee

World Tourism Day: From Goa to Switzerland, these destinations are…

BIRTHDAY SPECIAL YASH CHOPRA: 7 EPIC MOVIE SCENES THAT PROVE THERE WILL ONLY BE ONE…